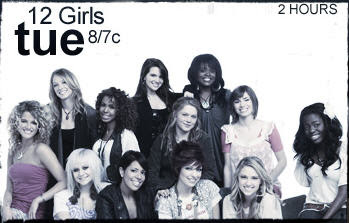 Well, here we are America!  Starting the live shows.  And if I must say so, it started off with a bit of a whimper.  Yeah, it happens every year.  It's the first time anyone is performing live so the first crop has a bit of a disadvantage (the guys will probable be better Wednesday).   But, with them saying how strong the girls are this year, I'm going to need to see a bit more.  There were a few that I thought have potential to be really good, but a lot of it just was dull and boring tonight.   I really don't know which 2 to pick to go home!  But I have about 5 to pick from, so we'll see how I'm feeling when we get to the bottom!  One thing I know, things aren't looking good from my TOP 12 Picks so far!

3 Weeks of Semi-Finals in front of us.  2 Guys and Girls eliminated each week until we get to the Top 12.   We will be hearing hits from the Billboard Charts for these 3 weeks, so the kids have many songs to choose from.   How did they do?


Okay, so who is going home?  I will go through my normal process of elimination, but I think at some point I'm just going to have to randomly pick 2!
Who is safe this week?  Lilly Scott, Katelyn Epperly, Michelle Delamor, Didi Benami, Crystal Bowersox
Most Likely Safe? Siobhan Magnus, Katie Stevens
Who is left?  Lacey Brown, Ashley Rodriguez, Paige Davis, Haeley Vaughn, Janell Wheeler
Who had some previous exposure?  Ashley, Lacey, Haeley
Who might get a sympathy vote because Simon told her she was in trouble?  Ashley
Who might be forgotten about after going 1st, having no exposure, and the judges saying she's probably safe?  Paige
Who couldn't I think of much to write about at all?  Janell

Let me tell you, my record for getting this stuff right is not very good!  Only for picking the winner of the whole thing.  It is way too early for that kind of predicting.  That's all I have for now.  Hope you enjoyed my ramblings and I'll see you Wednesday for the Guy's recap!


Ending Credits
Please Click to Support!- I'm moonlighting at Gather.com and writing some entertainment articles, including re-posting these blog entries.  Every page hit gets me closer to a teeny tiny donation for my efforts.  If you enjoyed my writings, please click here to register a page view.     And also check out my other writings at http://mvitullo.gather.com/
Check out my other Blogs:
LOST - http://www.lostaddictsblog.com/ (blog is back and on fire!)
FlashForward - http://www.flashforwardaddicts.com/ (back March 18th)

If one of the kids breaks out Taylor Swift next week I'll think of this post and have a good laugh.

I totally agree with you on Paige. Why on earth did the judges think she was so great? I feel bad for her, since she's almost certainly going home. My other pick to leave is Lacey. Despite her exposure, I don't think she gave a very memorable performance.

Taking Janell out...it's the humane thing to do.