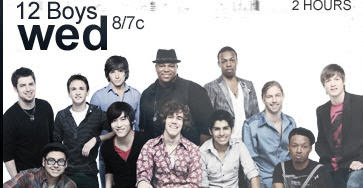 Hello America!   Well, the guys got it a LITTLE better than the girls this week, right?  Not much, but a little better.  I think there were a couple standout performers, lots of middle of the roaders, and a couple "what were you thinkings?"   It probably won't go down that easily, but we'll see.  We may as well throw my Top 12 predictions out the window, because it's not looking good at all!  Not that I'm complaining.  That's why LIVE Idol is better than pre-produced Idol.   America gets a chance to pick the talent!   Join me as I break down the 12 remaining guys and try to figure out life's biggest question.  Can a mullet really advance you to the next round?


Things I learned from 2nd night of LIVE TV.  The judges are still mostly giving the same feedback to each contestant.  I still can't stand Kara.  I miss Paula!
Let's break this down shall we?
Who is absolutely safe?  Andrew Garcia, Casey James, Michael Lynche, Lee Dewyze
Worst Performances?  John Park, Tim Urban, Jermaine Sellers
Not Smart performance? Todrick Hall
Sympathy Vote potential?  Tim Urban, Alex Lambert
Middle of Road?  Tyler Grady, Aaron Kelly
Forgot all about?  Joe Munos
Elimination Picks: John Park, Jermaine Sellers  Bonus (out of the blue) pick:  Joe Munos
It's a tough call.  Things don't normally go down as they should in these early weeks.  Middle of the road performers may be assumed safe and eliminated.  So, while I think John and Jermaine should go home, it could be someone like Joe that ends up getting the boot.  It's happened so many times before!   We'll see!
One more hour of Idol this week folks!  And Season 8 winner Kris Allen will be performing.  Get excited!  Hope you enjoyed my ramblings as always and I'll see you after the results!

Ending Credits
Please Click to Support!- I'm moonlighting at Gather.com and writing some entertainment articles, including re-posting these blog entries.  Every page hit gets me closer to a teeny tiny donation for my efforts.  If you enjoyed my writings, please click here to register a page view.     And also check out my other writings at http://mvitullo.gather.com/
Check out my other Blogs:
LOST - http://www.lostaddictsblog.com/ (blog is back and on fire!)
FlashForward - http://www.flashforwardaddicts.com/ (back March 18th)
Posted by Mike V. at 10:54 PM

MediaCurves.com conducted a poll on 4,154 American Idol viewers’ perceptions of which female contestants should be eliminated from the top 24 on tomorrow’s results show. Viewers selected Crystal Bowersox as the contestant who should advance to the next round of the competition based on her performance last night. The contestants with the lowest percentage of votes were Ashley Rodriguez, with 5.9%, and Haeley Vaughn, with 4.2% of the votes. The study will parallel American Idol voting to determine the weekly winners based on a democratic, “one person, one vote” methodology
More in depth results can be seen at: http://www.mediacurves.com/Entertainment/J7751-AmericanIdol-2-24-10/Index.cfm
Thanks,
Ben

we are blogging everything idol live with nicole at my blog justcherishtoday.blogspot.com - you should become a follower! Id love to have your input!! :)